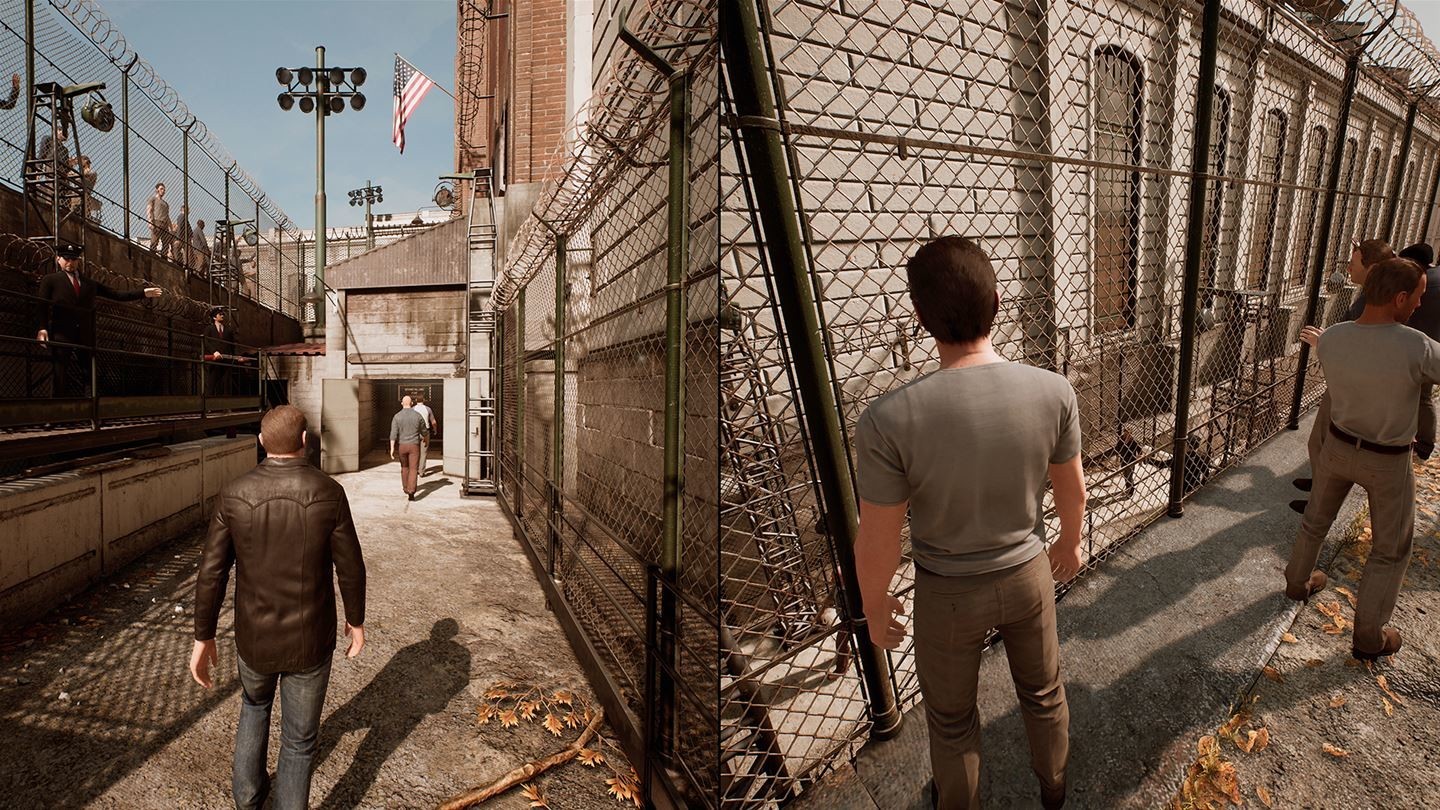 A Way Out is an action-adventure game played from a third-person perspective. It is specifically designed for split-screen cooperative multiplayer, which means that it must be played with another player through either local or online play. In the game, players control Leo and Vincent, two convicted prisoners who must break out of prison and stay on the run from authorities. As the story of both protagonists is told simultaneously, their progress may not be synchronized, which may result in one player being able to control their character, while another is watching a cutscene.Players need to cooperate with each other in order to progress, and each situation can be approached differently, with both characters taking different roles. For instance, during an early segment of the game, the player controlling Vincent needs to distract a nurse and guard, so the player controlling Leo can find a chisel needed to aid their escape. These roles are not fixed, so Leo and Vincent can swap their roles in another playthrough. Players can interact with many non-playable characters, and there are dialogue options for players to choose. Similar to the PlayStation 4 version of Far Cry 4, players will be able to join online sessions (hosted by the player's friends) whether or not the joining player owns the actual game.

In 1972, Vincent Moretti (Eric Krogh) is freshly incarcerated and sent to prison for fraud and murder. In jail, he meets Leo Caruso (Fares Fares), who has now been inside for 6 months for grand theft, assault and armed robbery. While in the cafeteria, a thug sent in by crime boss Harvey tries to murder Leo, but Vincent intervenes, resulting in both of them being sent to the infirmary while the thug is beaten to death after stabbing a prison guard. While in the infirmary, Leo requests Vincent's help to steal a chisel from the office. Vincent complies. After the theft, Vincent senses that Leo is planning on a prison break and offers to help so that he can escape too. Leo initially refuses, but begrudgingly agrees to collaborate when Vincent reveals he also has a grudge with Harvey. Leo and Vincent make progress on their escape plan, stealing sheets to make a rope and smuggling a wrench to open a grating. Using teamwork and gathered tools, the two escape from the jail on a rainy night. After evading the police in the wilderness, the two find an empty camp and fish to make food. Vincent reveals that Harvey had him launder money before murdering his brother as a warning and framing Vincent for the murder. Leo starts telling his story but is interrupted when a police helicopter flies by, causing both to start moving again. They later find an old couple's house, and the two steal new clothes, a shotgun and a truck before evading the pursuing police in the vehicle and, after crashing, a rowboat. After surviving a waterfall, the duo finds civilization, after which Leo reveals Harvey and him had stolen a valuable gem, a Black Orlov, but that when Leo tried selling it, Harvey betrayed him by killing their buyer and escaping with the gem, leading to Leo's arrest. At a trailer park in the city, Leo confirms the safety of his wife Linda and his son Alex, before going to a construction site with Vincent. They find Ray, one of Harvey's underlings who works as a construction foreman, and, after a chase, the two capture and interrogate him to find Harvey's location, which they find out is Mexico. Plotting revenge against Harvey, the duo robs a gas station to buy guns from an arms dealer, Jasmine. When the two leave, Jasmine follows them and betrays them by giving their location to Harvey. Later, at a telephone booth, Vincent calls Emily, a pilot, and convinces her to fly them to Mexico. He then learns from her that his wife, Carol, had just gone through childbirth. The duo agrees to go to the hospital, but a hitman sent by Harvey arrives, attempting to kill them, but in the end failing. They then go to the hospital and Vincent gets to see his newborn daughter, but quickly needs to leave as police officers surround the building. Leo is captured but manages to escape thanks to a diversion by Vincent. The next day, Emily flies Leo and Vincent to Mexico, and the two find their way to Harvey's mansion. After a firefight with Harvey's guards and Harvey himself, the two overpower Harvey, force him to return the Black Orlov and, after he attempts to take one of them hostage, kill him. Escaping with the Black Orlov, Vincent and Leo return to the United States on Emily's plane, but are immediately surrounded by police upon landing. An officer takes the Black Orlov from Leo and hands Vincent a gun, revealing that both him and Emily had been undercover police officers. Leo and Harvey's Black Orlov deal had actually been arranged by the police, and the dealer killed was Vincent's brother, Gary. Feeling betrayed, Leo subdues Vincent, takes him hostage and hijacks a police car to escape. While trying to avoid a police roadblock, he crashes the car into water. Both escape the submerged vehicle, Leo stealing a boat while Vincent is picked up by Emily in a police helicopter. After a chase where Vincent tries to destroy the engine of the boat, Leo jumps off before it crashes into explosive tanks and runs into a portside warehouse. Emily lands the helicopter and both her and Vincent chase him inside. Leo manages to ambush Emily, taking her gun away and ordering her to leave as this fight is between him and Vincent. The gunfight ends with both sides injured, unarmed, and exhausted on the top of the roof. Seeing that one of their guns is dropped nearby, both try to reach it, but only one is able to and shoots the other. The two share a final moment of friendship before the person shot dies from their injuries. If Leo survives, he takes Vincent's apology letter and delivers it to Carol, then proceeds to leave town with his family while Vincent's funeral is taking place. If Vincent survives, he informs Linda of Leo's death before returning to Carol, making amends to save their marriage and raise their daughter by revealing he resigned from the police and proclaiming that it's over.